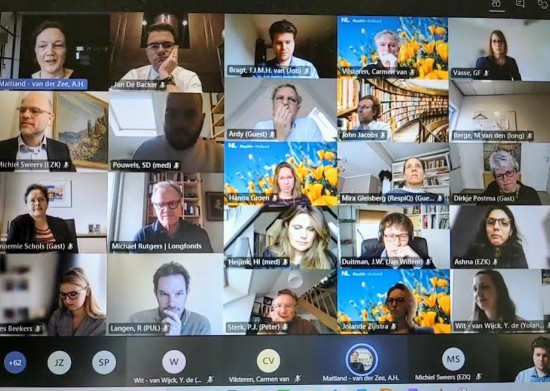 On the 3th of March 2021 we celebrated the kickoff of the P4O2 consortium after it was officially granted by Health~Holland. Academic partners, private partners, patients, sponsors and all others interested were invited to this meeting that took place digitally because of COVID-19 restrictions. A total of 95 persons joined the meeting.

In the morning, PI prof. Anke-Hilse Maitland-van der Zee of Amsterdam UMC opened the consortium with unlocking the prevention of lung disease. One of the founders of the Dutch National Program Lung research, Dirkje Postma, explained how P4O2 came into existence. Years of discussions led to this consortium and the research questions addressed in P4O2. The chair of Top Sector Life Science & Health, Carmen van Vilsteren, explained public-private partnerships in Health & Care and congratulated the consortium with the start of the project. Michiel Sweers, Director Innovation & Knowledge Ministry of Economic Affairs and Climate Policy, gave a speech about the role of the government in supporting Dutch research and collaborations with private partners. Michael Rutgers from Lung Foundation Netherlands (partner in P4O2) explained how patients can be involved in research and provided some examples of their great contributions. Jan De Backer, CEO of FLUIDDA, gave a presentation about recent findings they published on damage to the lungs in COVID-19 patients that was detected by innovative imaging techniques, which will also be deployed in P4O2 and explained chances for private partners in joining PPPs. After networking in smaller groups in Gathertown (which was also available during the breaks later at the day), where the participants were asked to speak about their best team experience ever to at least two persons they never spoke to before, the participants got together again in the main meeting. Gerd-Jan Poortman, professional ocean sailor that competed three times in the Volvo Ocean race, showed some impressive footage on teamwork at his work space. Communication is the key to success; if we know each other well, we can challenge each other in ‘storm sessions’. Each member is a shackle in the chain: We by Me! 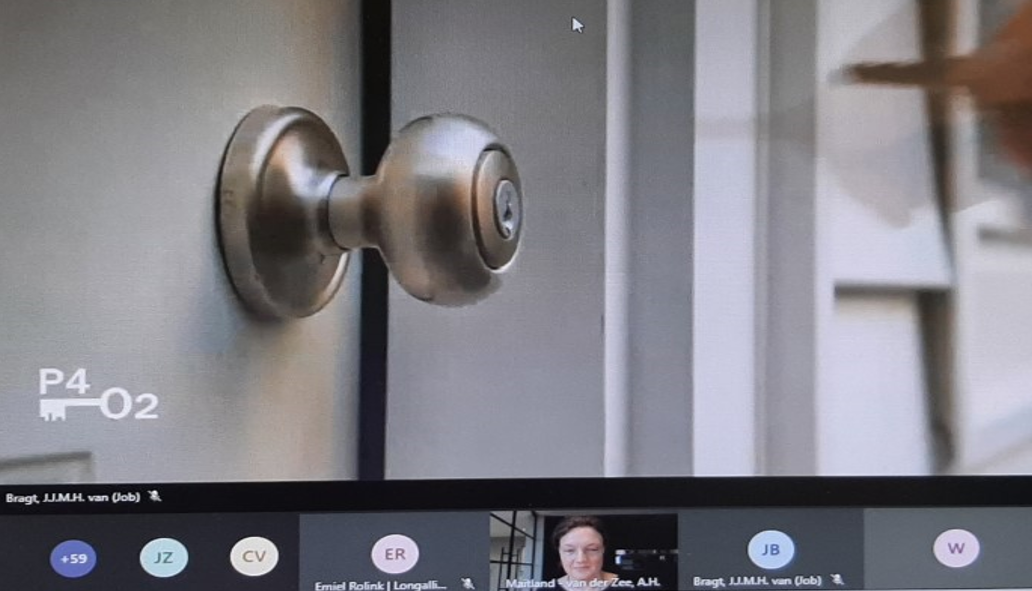 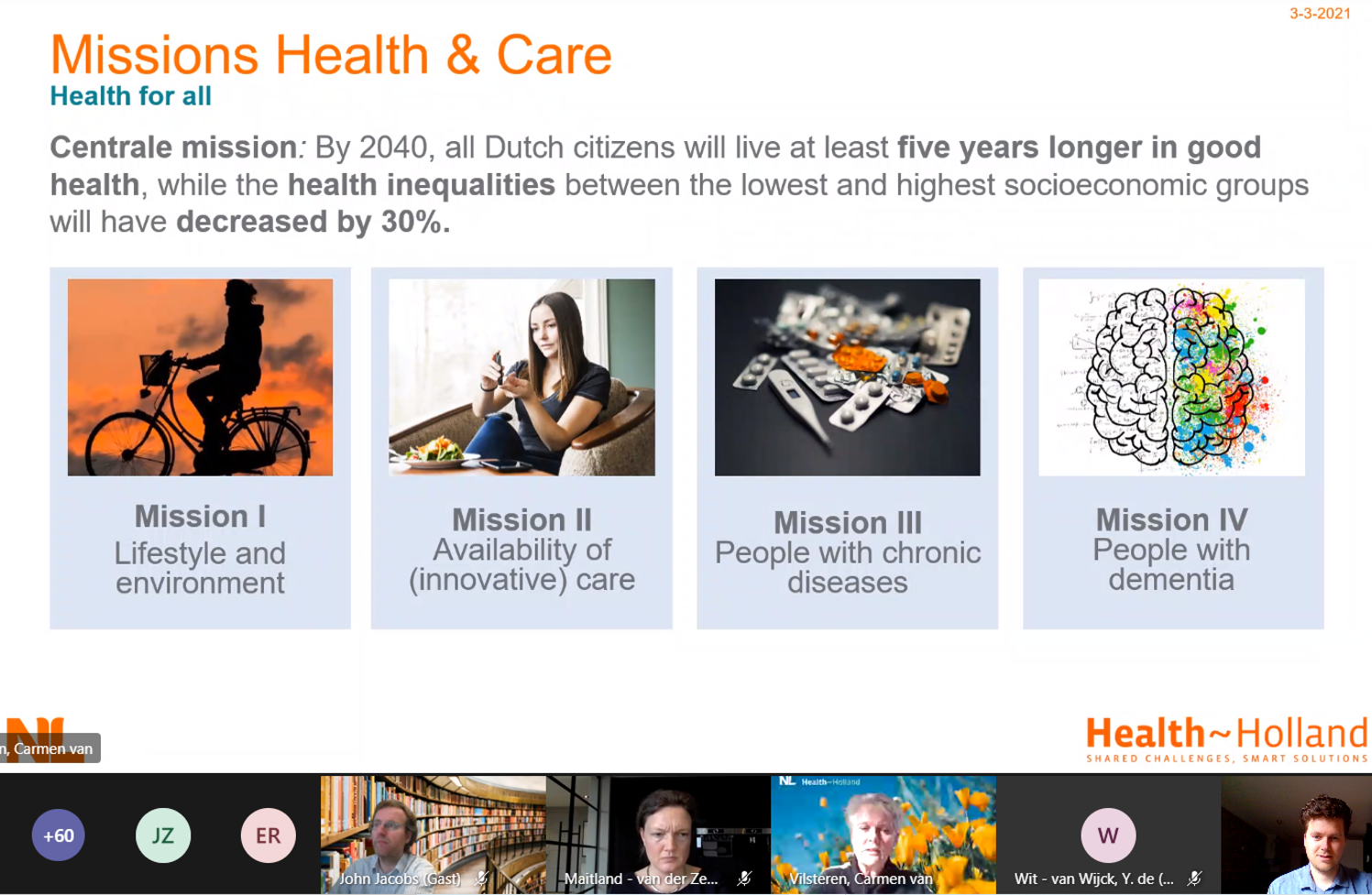 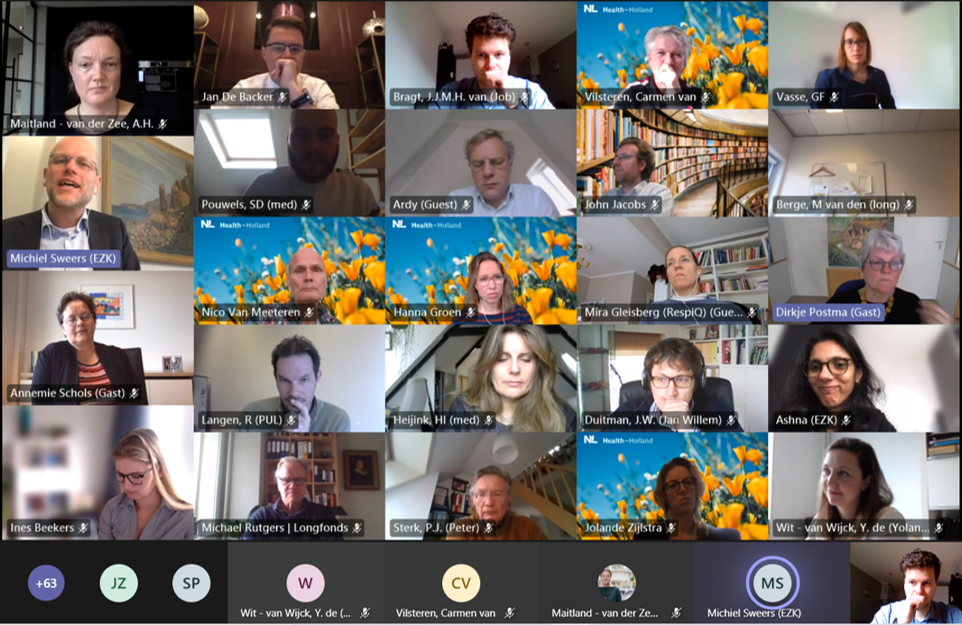 In the afternoon we focused more on the science in P4O2. The different work packages in P4O2 were shortly presented and participants got the chance to visit the following breakout groups and to design a 100-day plan: 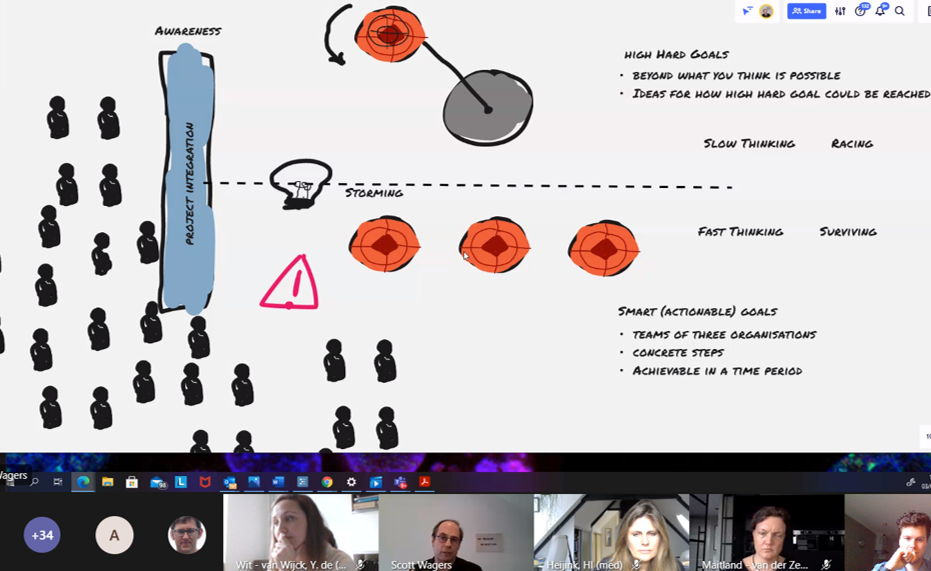 The groups came together and presented their plans, which will be the start of discussions of at the work package meetings that will now start to be organized. John Jacobs and Menno Brandjes of Ortec Logiqcare presented the database and communication tools that will be used in P4O2. Don van Velzen of Amsterdam UMC summarized the financial construction of P4O2 and explained what needs to be reported each year and in case of deviations from the budget. Frida van den Maagdenberg, financial board director Amsterdam UMC, gave a speech in the name of the coordinator Amsterdam UMC. The last presentation was about the governance structure of P4O2 and we discussed a financial challenge for P4O2. 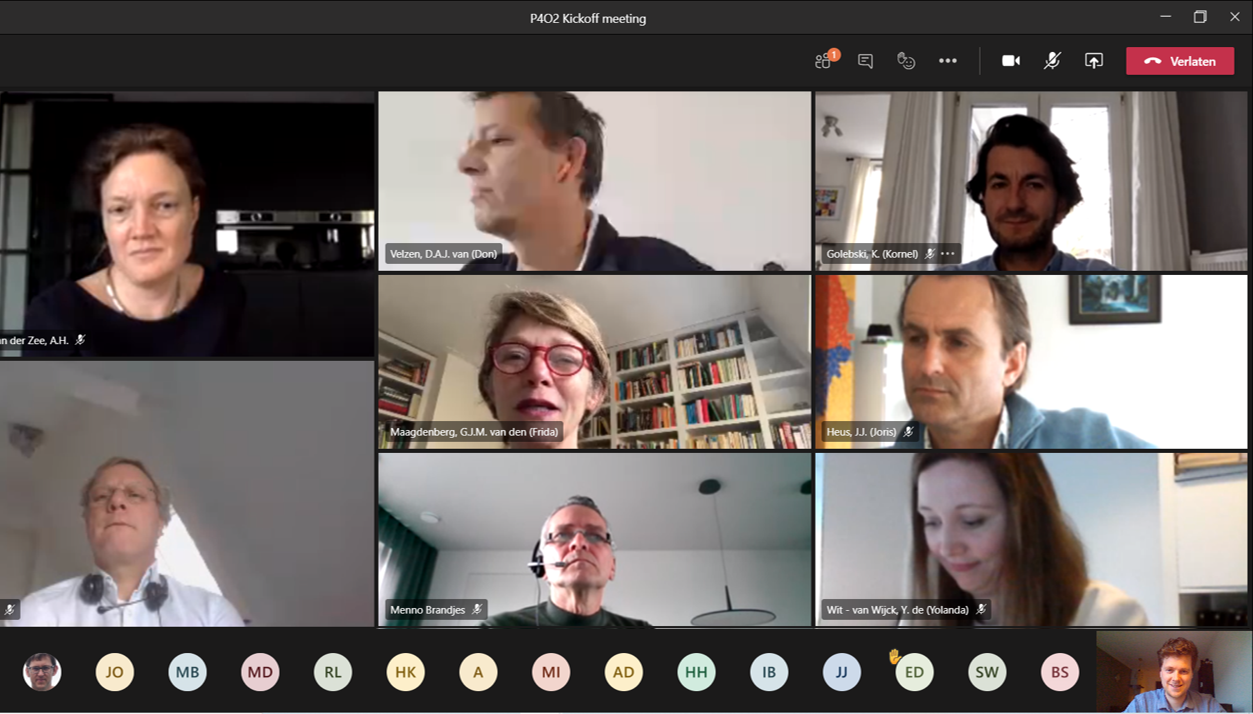 Frida van den Maagdenberg gave a speech in the name of the coordinator Amsterdam UMC.

We are very thankful for the nice presentations, the kind words and your participation in the kickoff. It was again stressed by multiple speakers that P4O2 has great potential with so many disciplines and so many different partners involved. We are now off to start more frequent meetings with all parties involved in smaller groups and to work on the first deliverables. Off to identifying treatable traits and innovative personalized therapeutic strategies to both prevent the progression of early-stage damage and to reverse established lung damage by stimulating repair! 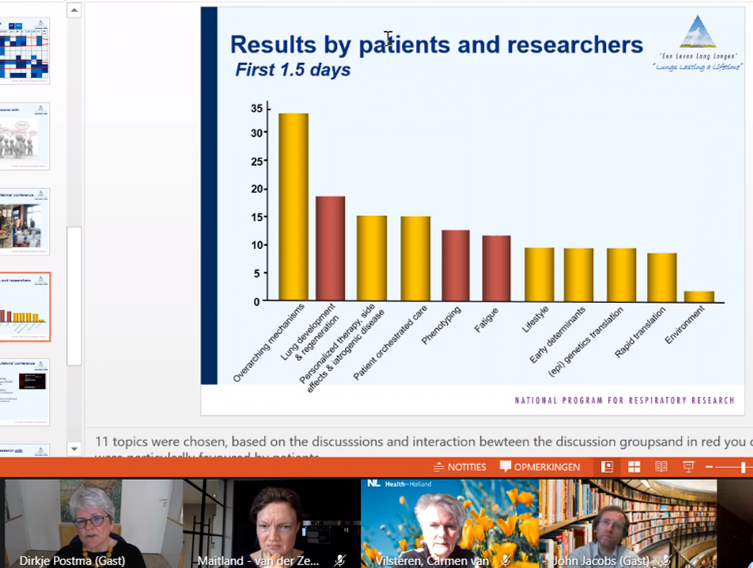 Dirkje Postma told us about the long history of P4O2. 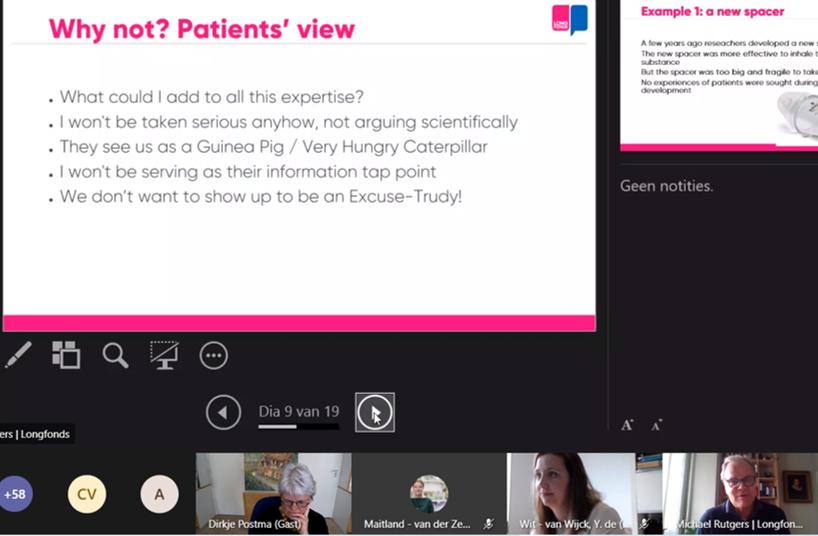 Michael Rutger explained the importance of involving patients in meetings that discuss the research. 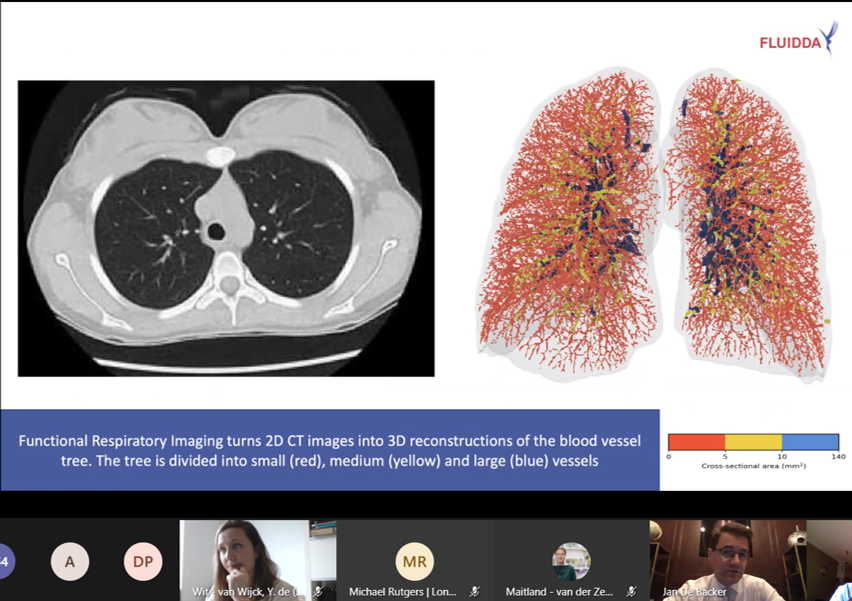 Jan De Backer clearly showed why we should use innovative techniques to detect lung disease. 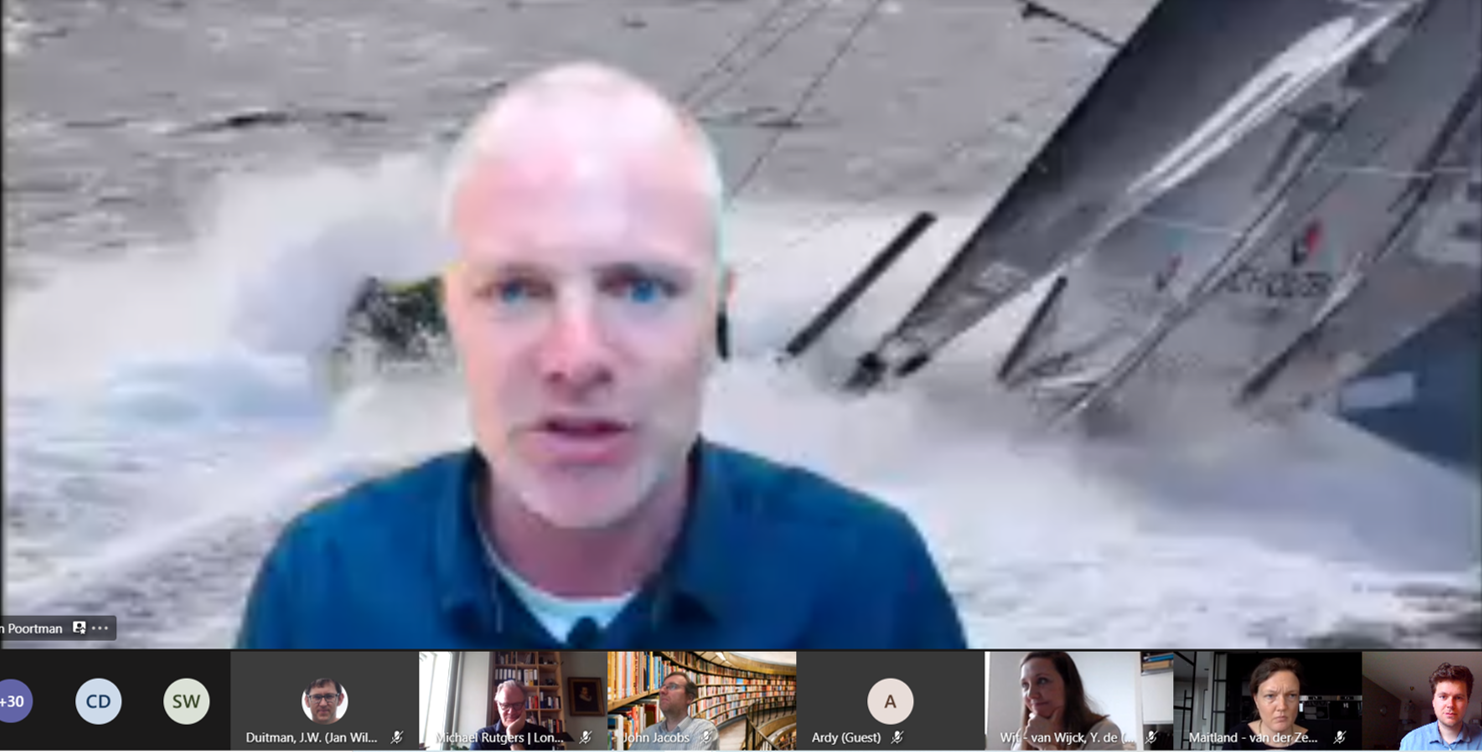 Gerd-Jan Poortman impressed us with stories from his 'office' and explained how a starting team can grow to a successful team. 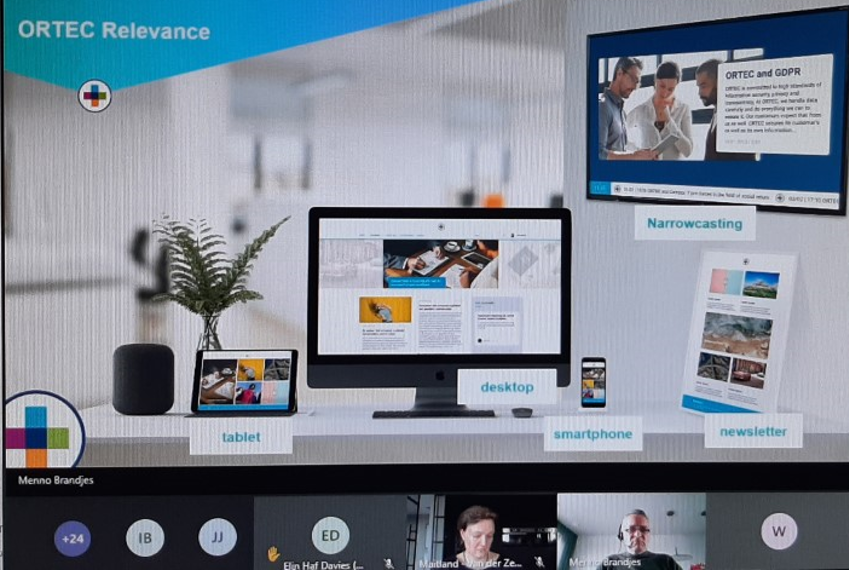 Menno Brandjes introduced us to the communication platforms that will be used. 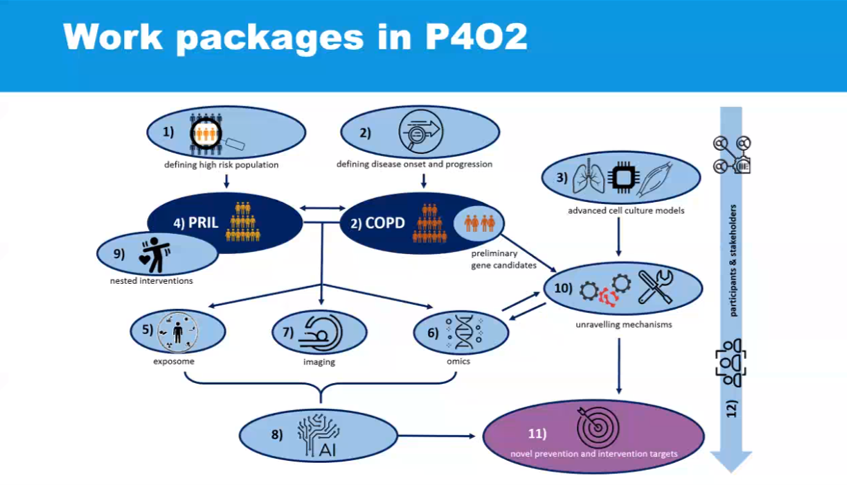 Work packages in P4O2 were further discussed in breakout sessions.

Return to overview
Are you interested in collaborating in P4O2? We would be happy to meet and discuss opportunities.
Read more
© 2021 P4O2