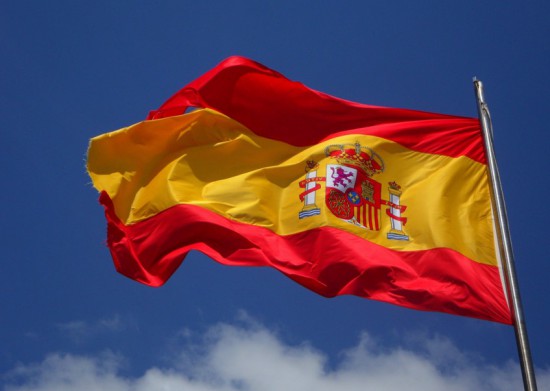 A P4O2 stakeholders meeting was organized on the 29th of September, 19.30-21.00 in Hotel Zenit Conde de Orgaz, Madrid. The goal of the meeting was to describe the P4O2 research proposal in greater extend with mainly interested pharma companies, and the representatives from the headquarters of these companies.

P4O2 is one of the three focus areas of the National Program for Respiratory Research that was founded in 2012. In June 2019 the research proposal P4O2 was drafted and twelve team members started to actively contact public and private partners to inform them about this initiative. They were invited to the this first P4O2 stakeholders meeting in the Netherlands on the 17th of September 2019. The meeting in Madrid during the ERS congress was set up to speak to the representatives from the headquarters of pharmaceutical companies.

We thank the twenty-eight attendees for their presence. Representatives from universities/university hospitals from Maastricht, Amsterdam, Leiden, Utrecht, Rotterdam and Groningen were present. The NRS, Lung foundation Netherlands and LAN represented the lung researchers and patients. Five large pharmaceutical companies and two companies specialized in imaging attended the meeting. 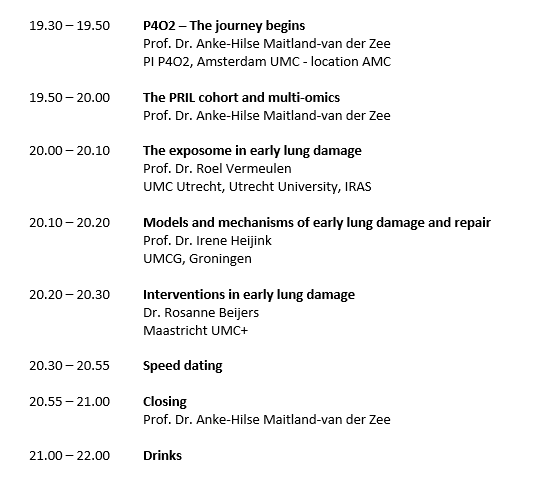 Prof. A.H. Maitland-van der Zee explained that the goal of P4O2 is to enable early detection of lung damage and thereby reducing the number of patients and burden of respiratory disease. The proposal will be submitted to Health~Holland in March 2020. Questionnaires will be send to 5000 people (40-55 years of age) to identify candidate areas and populations that are at increased risk of developing respiratory disease. In the four years that the Health~Holland call will cover, the questionnaire will be sent and analyzed, models will be set up, all participants will be included and the first follow up measurements will be done. In the long term the cohort will be followed up for about 5 years.

Prof. Dr. R. Vermeulen discussed that non-genetic factors cause the predominance of disease burden and that about 50% of these causes is unknown in middle-aged people. There is a need for increased measurement of exposures in the environment. The exposome explains all risk that is not caused by genetics. Just like other –omics, the risk derived from the exposome can be mapped in an exposomics scan. This scan can be combined with metabolomics to gain more precise information on the exposome. This may contribute to a better understanding of risk factors for lung disease and may lead to earlier detection of lung damage.

After the presentations attendees discussed the proposal with the team.

We look forward to discussing the proposal further with interested parties. Please contact us at nrs@nrs-science.nl if you like to meet a member of the team.

We thank the NRS for powering this meeting.

Return to overview
Are you interested in collaborating in P4O2? We would be happy to meet and discuss opportunities.
Read more
© 2022 P4O2